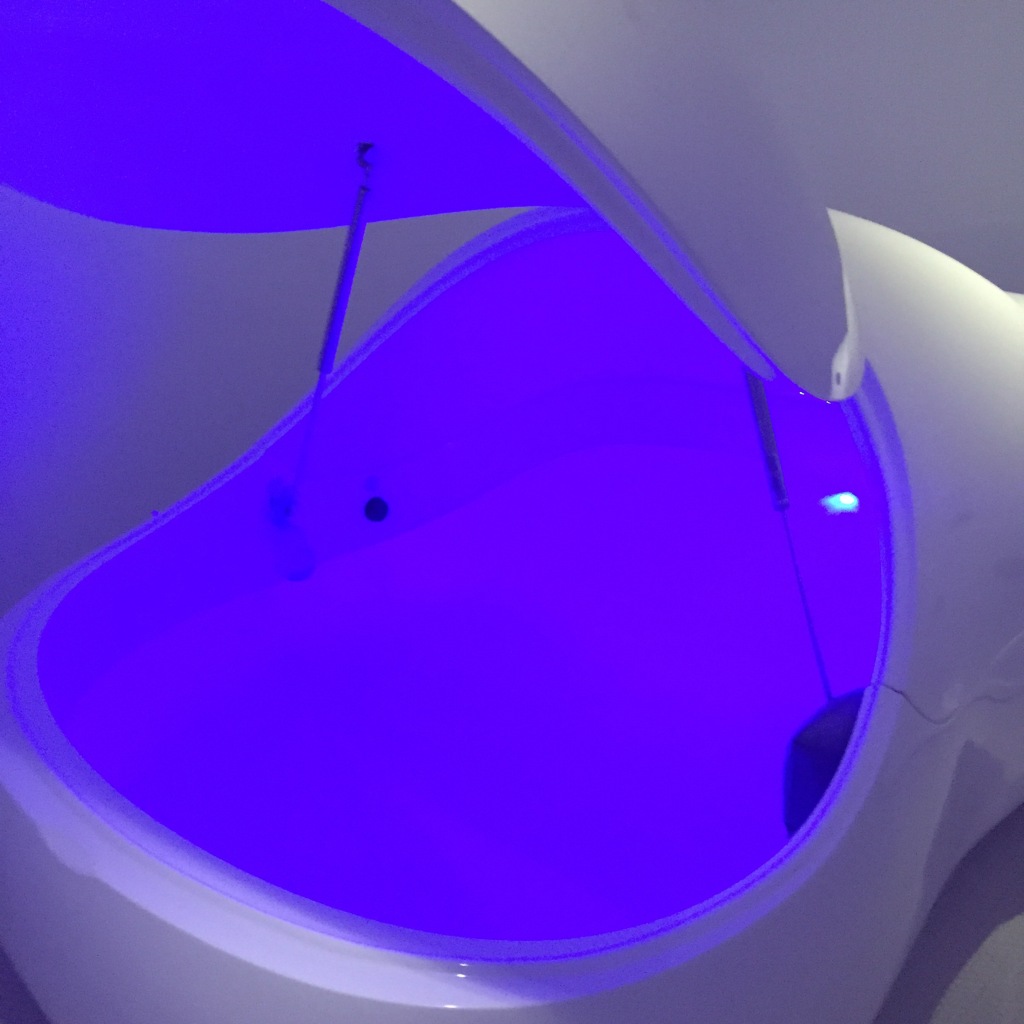 I’ve had a fascination with sensory deprivation tanks – or ‘floating’ as it seems to be called these days – ever since I first saw them in an episode of The Simpsons. In ‘Make Room for Lisa’, Homer and Lisa float in tanks half-filled with water the same temperature as their body which, when combined with the complete lack of light once closing the tank door, prevents their mind from feeling a difference between their body and the water (giving the sensation of floating) and allows them to fall into a state of deep meditation and relaxation. Of course, being The Simpsons, wacky adventures ensue.

Recently I decided to try it for myself. As I made my way down an innocuous street in Prahran to my first ever float session, I still didn’t really have any idea about what to expect. Turns out, the depiction in The Simpsons was pretty accurate!

Walking into Beyond Rest was like entering a place of urban zen. Nestled between apartments, warehouses and factories, it still managed to have a calming feel and it was peacefully quiet. After detailed instructions on what to do and the reported benefits of the session (think Stress Relief, Improved Sleep, Deeper Mindfulness and Other Good Things), it was time for me to see what all the fuss was about.

I was directed to my room which had a shower, supplies, and – of course – the tank. After showering and drying my face thoroughly (water on your face can be quite distracting apparently), I inserted my ear plugs to keep water from going into my ears, climbed into the tank (sans bathers) and shut the door (not as easy as it looks, that thing is heavy!). I easily fit in the tank and was able to float quite comfortably. For the first ten minutes, a dim blue light was on and soft music was played to allow floaters to get used to the sensation and get comfortable. But once they’re turned off, that’s when the real fun begins.

I have to admit, when I was first plunged into darkness and complete quiet, it was extremely eerie. Although there’s a light switch and panic button within easy reach and you can open the tank door at any time, I was determined not to use them. So I lay there trying in vain to stop thinking and just enjoy the experience, and wondering how long I would last in the 60 minute session before I got uncomfortable or bored.

At first this was hard to master and I ended up sitting in the tank instead of floating (quite difficult as the high level of epsom salt means you naturally float!) as I wanted a familiar feeling rather than the initially odd sensation of floating weightlessly in a seemingly endless body of water. Then, when I finally got comfortable in a floating position, I was so amused by the fact that I really couldn’t feel the difference between my body and the water that I kept wriggling my toes just to feel the water lightly splash over me. Yepp, I thought, this was going to be a long session.

Soon enough though, my thoughts began to get quieter and I stopped moving about. The next part is a bit of a blur. I no longer felt uncomfortable or distracted, but instead felt rested and deeply relaxed. Although I suppose I was still thinking in a way, my thoughts were not logical or coherent; they were kind of like a mix between deep daydreams and light dreams. My mind well and truly wandered and I’m certain there were periods where I was so relaxed I fell asleep. Apparently this is not uncommon and is the sign of a good float. This feeling of light sleep continued for the rest of the session until the music and dim blue light automatically came back on to signal that I had 5 minutes left before my session ended. This allowed me to slowly ‘wake up’ and mentally prepare to finish the session.

I emerged from the tank feeling deeply relaxed, as well as extremely proud of myself for making it through my first float! After showering and getting dressed, I left Beyond Rest feeling so calm I wasn’t sure how I’d be able to string a sentence together, but so invigorated that I wanted to tell everyone what a great experience it was. That night I also had one of the best sleeps in recent memory. Although I realised the next day I had managed to get water in my ear which remained lodged there for four days afterwards (the crackling! The sloshy sounds! Argh!!) and the ridiculously good sleep appeared to only be a once off, the deep feeling of calm lasted a lot longer and I still momentarily bask in that feeling when I think back to my session. I’m already booked in to go back and do it all over again!

Have you tried floating? I’d love to hear your experiences! x

iThere are no comments

Begin typing your search above and press return to search. Press Esc to cancel.